EXPERIMENT 2 BRIEF . 3/15/14
Please upload below your final pdf's, the 150 word descriptions and a list any necessary sources. 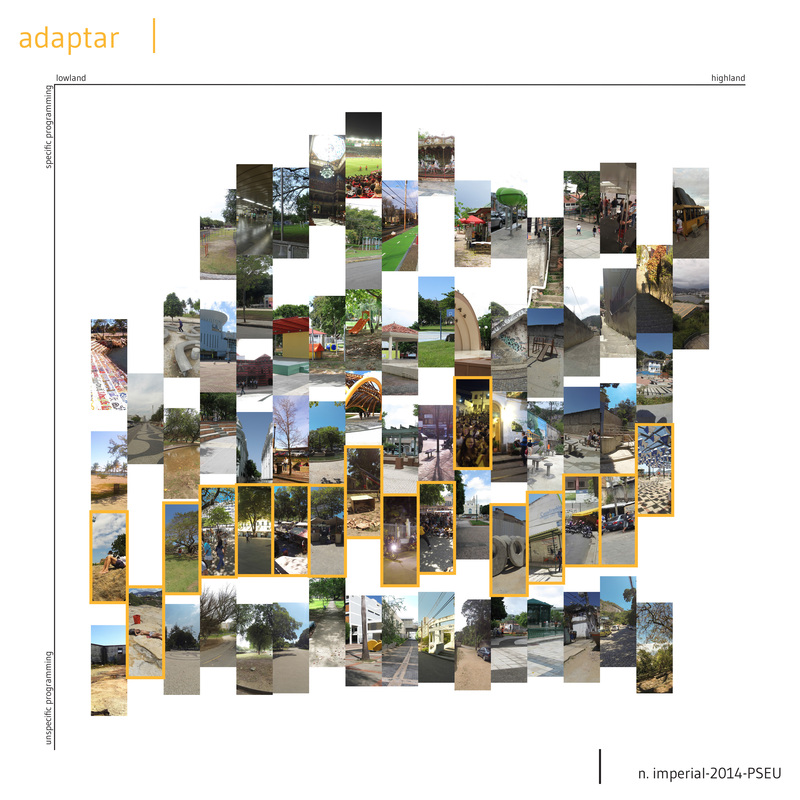 Adaptar
Nick Imperial
A visual analysis of changes in intended programming in the urban public space as one moves from lowland to highland. Special regard is given to instances of retroactive adaptation of these spaces. 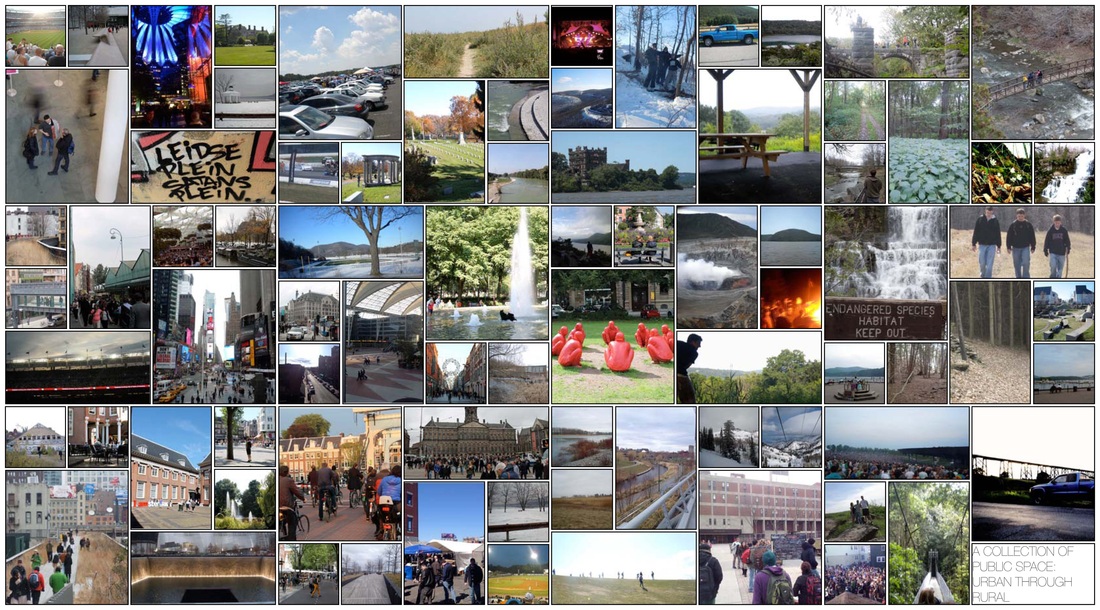 While selecting photos for this collage I was thinking about how many different types of spaces can be considered “public space”. Typically it is defined as an open, social space that is accessible to people. In some cultures the plaza is the definitive example of public space and this example has been recreated in many regions, urban and rural alike. What other public spaces have qualities of the plaza? What are other public spaces unlike the plaza, and can they really be considered public? In urban public space the density of people using the space remains relatively consistent in that there is always someone using the space. This does not remain true for suburban or rural public space. While rural public space can still have large densities of people, it exists with more sporadic use. For example a concert in upstate New York held at a park may pack 15,000 people in one day and might have less than 10 visitors for the next week. Or a suburban parking lot in New Jersey, normally not used, becomes a weekend car meet with thousands of people. For the intent and purpose of making this collage I considering public space as any space where spontaneous social interaction can take place. 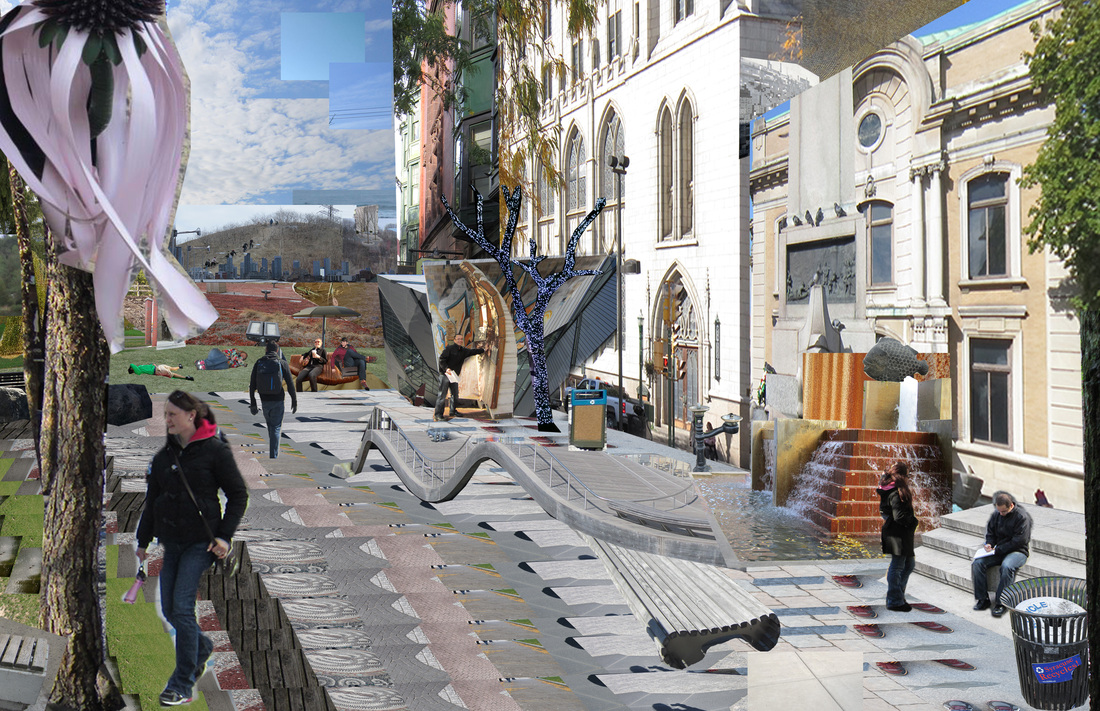 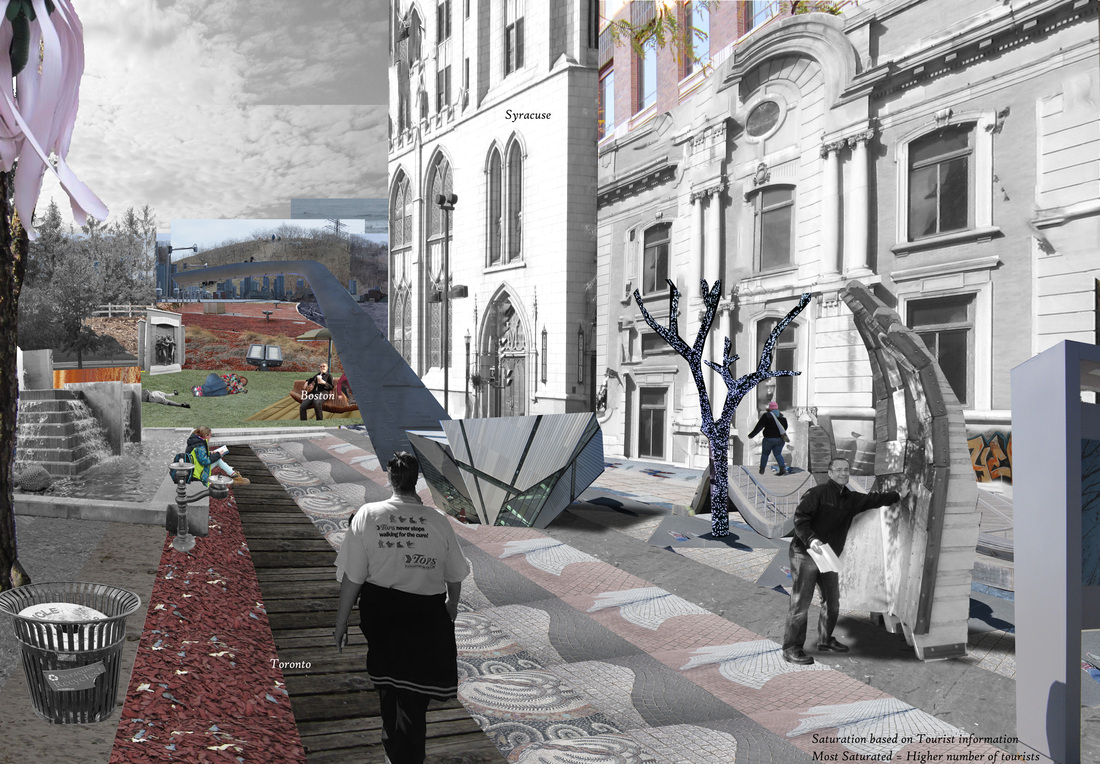 When I first started going through my photos for this collage, I had no idea where it was going to take me. After looking through all of the pictures for a while I came up with the idea of taking details from each photo and using them to create on complete image that would portray a public space.

The first attempt I made at the college turned out a little messy and did not have any means of quantifying the qualitative pictures I chose. To quantify the pictures, I chose to play with the saturation of each individual piece of the collage based on the tourist information from the place it was taken. Out of my picture library, I chose pictures from Syracuse, NY. Boston, MA, and Toronto, Canada. Toronto has the most tourists followed by Boston and then Syracuse. I kept the pieces from Toronto at normal saturation and decreased it down to 25% saturation for Syracuse.

The process of quantifying public space in this project is a little skewed due to the size of the three cities being completely different. In order to make this project more consistent I should have chose cities of similar size. However, my goal was to use pictures of public place that I have taken myself. Creating a collage from pictures that you have in your own library is interesting because it can reveal different elements of different public spaces that you, yourself, have seen in person. 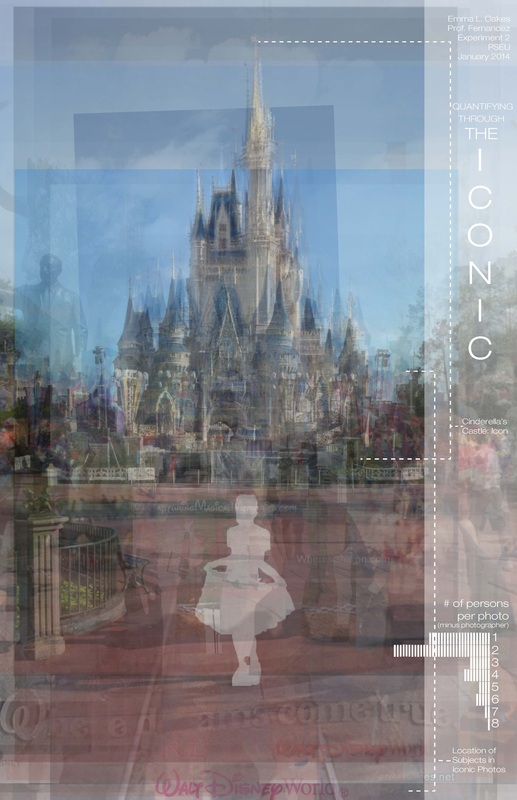 Quantifying Through The Iconic
Emma Oakes

This experiment began with the Google search bar and the phrase "In front of Cinderella's Castle". Within a 2 hour span of time I was able to easily gather 82 images featuring this iconic Disney World attraction. These valuable images are of an experience that most people can only dream of. Those that do venture here are obligated, in a way, to take a photograph in front of this magical place as a kind of "proof" and memory of their visit.

Having said that, it is obvious that there are thousands and thousands of images out there just like these 82 collaged ones. So, what else can we learn from this iconic image of place aside from it's ceaseless repetition?

As I was cutting out the subjects in the photographs and layering them, I began to notice a trend in group size. So, I tallied-up the number of persons in each image (people that were facing the camera/that the picture was of). Without counting the photographer, I discovered that the average touring group that takes photographs in this particular place is between 1-3 people. This information might not seem like that big of a deal, but think of how a design might be effected having known this information, versus having not.

To conclude, these images might seem overdone, "classic", or timeless, but by stripping down the qualitative and removing our own cultural biases about these iconic places (whether good or bad), we can reveal interesting and potentially important, quantifiable information that could help us in numerous ways in the future. 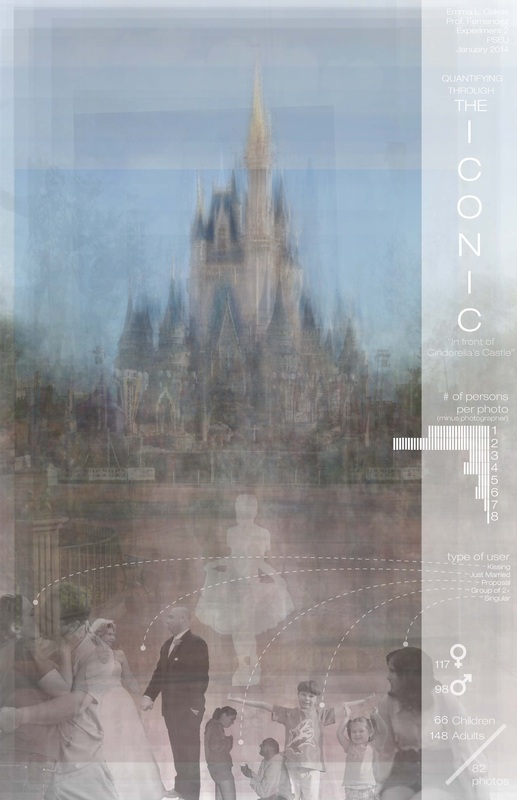 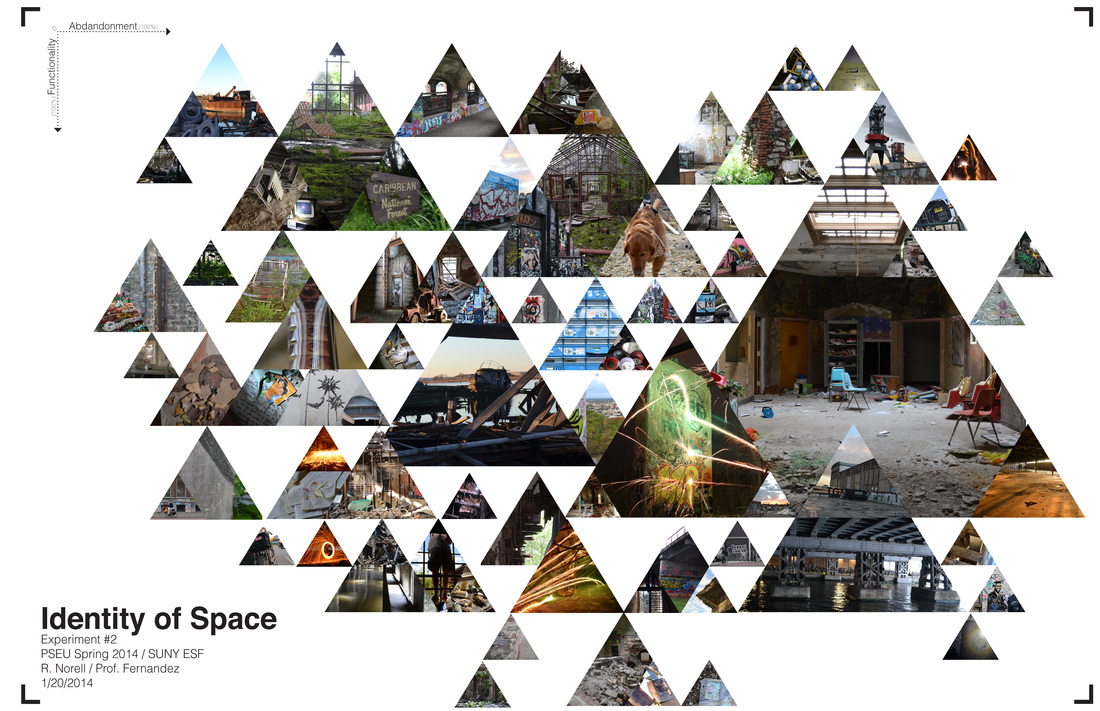 My collage begins to look at spaces and their inherent qualities of detail in a reinvented space. No matter the space a person occupies the user will have some kind of emotional attachment, or lack of, to said space. I have collected an assortment of my favorite details of space, from lighting and repetition to peeling lead paint my personal interests are vastly different. (all pictures are my own)

Above I aligned the pictures together with spaces of the same funciontality or abandonment. Labeling the two axis I have created a web that looks to investigate the identity of space after it has been reclaimed or repurposed. 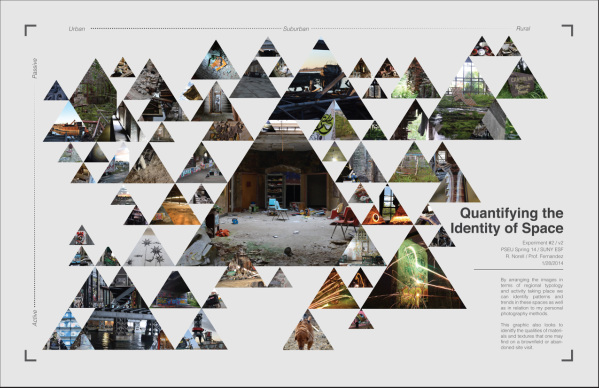 As a redesign from the initial project I took several steps to create more meaning than contrast of image to background. Using a toned and slightly warm background color rather than bright white I was able to keep more focus on the same images reworked by looking at different input factors.

For the composed meaning of the work I have broken down the images again in a much more comprehensive manner. Showing the spacial typologies against traffic and activity from the space lets the reader identify key elements that repeat in the different areas identified. One can also pick up on trends and patterns in areas or axes between the variables.

Discussion
Located on the Museumplein behind the Rijksmuseum the IAMSTERDAM sign is one of most popular photo opportunities within the city of Amsterdam. By compositing and overlaying 82 photos from different users, this collage reveals how people interact with the signage and with one another. The geometric typeface Avenir used in the IAMSTERDAM sign create nooks that allow people to stand, rest, dangle, climb, and even conquer them (see the users on the letter “t”). Following the edges of each photo (made possible as a result of the transparency overlay) also informs us of how the users take the photographs and the focus/scope of their work. By quantifying where each person is within the photo in relation to the IAMSTERDAM sign, relationships such as which letters users are most likely to pose next to can be revealed as well.

Due to the properties inherent to transparency overlay method, there can be a plethora of different layer combinations all resulting in a new image. Above are (3) combinations of the 82 photos sequenced. This method not only demonstrates the capabilities of using overlays but also reveals limitations --- it is graphically impossible to clearly represent all 82 photographs in one image.

Another finding is how different gender groups engage with the IAMSTERDAM sign. Males are more likely to pose in areas that involve higher degrees of physical activity to reach than females are (though this notion falls apart when applied to children). However, that is not to say that one group engages the signage in a “more”/“less” meaningful way than the other but rather, there are some social patterns that can be identified specific to certain cultures or, or dare I say it, genders. In this specific sampling of 82 pictures, females are twice as likely to wedge and squeeze themselves in-between the nooks of the letters than their male counter-parts, who prefer to climb and scale to the top of the sign. 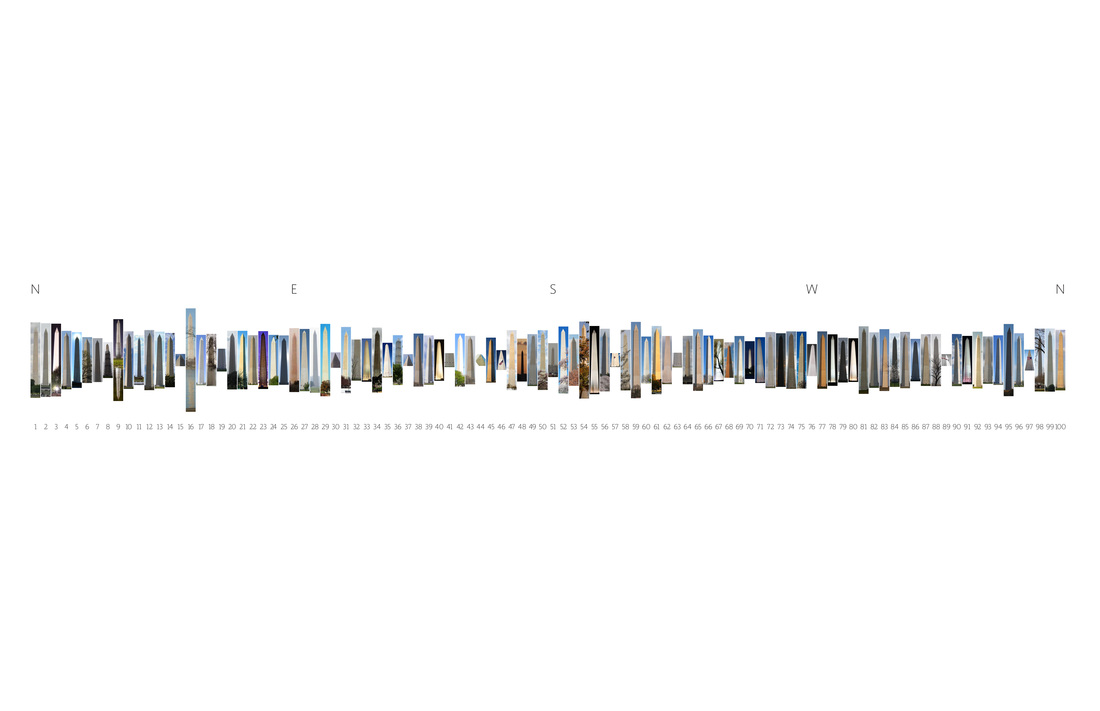 This collage is a sort of inverse panorama of the Washington Monunment, located in the center of the National Mall, Washington D.C. Each image in the collage was sourced from geographically located photos linked to google maps.

Starting on the left side of the collage the images show views of the monument from the North, East, South, and West from varying distances.

The fact that the Monument can be represented in such a way is a testament to it's success as a monument. It dominates the landscape that surrounds it and captures the attention of those who pass through as a symbol of American power and legitimacy.

Utilizing the same concept as the Washington Monument collage above, this image presents a 360 degree view of Syracuse's Soldiers and Sailors monument. By taking all the images myself I was able to ensure a higher degree of consistency between them but in the process lost the influence of time and photographer perception on presentation that the earlier collage might have captured.

Material Use in the Northeast
Jim Gross

This collage is constructed using images of public places along the north-eastern coast of the US. The images are organized by the specific latitude of the of space, as well as the time of year the image was taken.  This study attempts to determine how users react to certain materials, as well as how the materials react with the elements, temperature, and other materials. 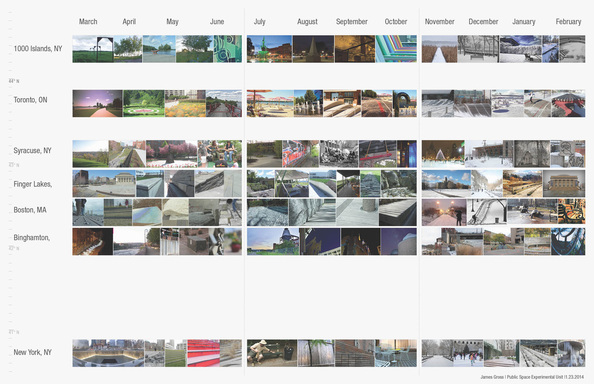 The images are organized by the specific latitude of the of space, as well as various design elements: walls, water features, paving materials, plant materials and seating elements. This study attempts to determine differences in material use, as well as how the materials react with the local climate.