Using both a 4x4 and a 5x5 square frame, the pieces, representing each individual intelligence can be pieced together next to one another to help understand the spatial relationships between the intelligences. Both the frame and the pieces are constructed out of foam core, the pieces being 2" squares.

This model is biased towards the visual/spatial and logical/mathematical intelligences.

Our ideagram is a pre-application exploration of the processes and forms we believe will be most conducive to the design and implementation of a successful and cost-effective intervention in the Castañer plaza.

The combination of two elements; a pattern derived from the shape of a coffee bean and a system of modular folds, represents the intersection of our intelligences while maintaining a connection to the others. Patterning and folding were chosen as operations for their versatility in application and abstraction and their appeal to a wide range of people.

After the construction of our model we feel that it's greatest strengths, those that we would like to continue to work with into the design of the plaza, are it's modularity, flexibility, resilience, interactivity, and it's relatability to it's environment.

We chose a conceptual form over an actual one because we want it act as a framework to elicit and communicate the forms desired by the community during the workshop rather than prescribing something uninformed.
Clouds & Earth
Nick Imperial
12 February, 2014

CUT AND PASTE : redistributing the ground plane
by Andy Kiselica and Joshua Thayer 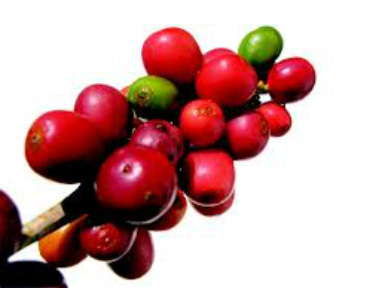 Using the coffee cherry as inspiration, I suggest that we alter the plaza through a process of re-texturing the ground plane. Using a pattern based on the natural form of coffee growing in clusters, I suggest that we cut some of the concrete to break the monotony. Making the cuts will allow us to reuse the concrete shape in other locations, open the earth for planting or drainage, and create a new environment for the user. 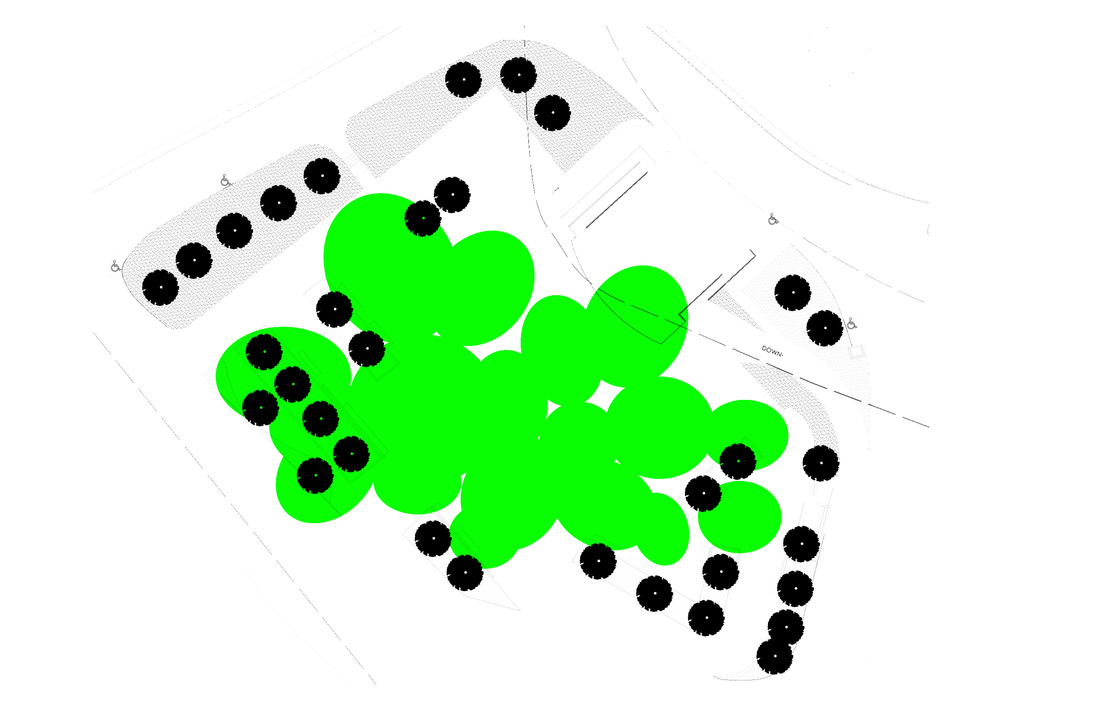 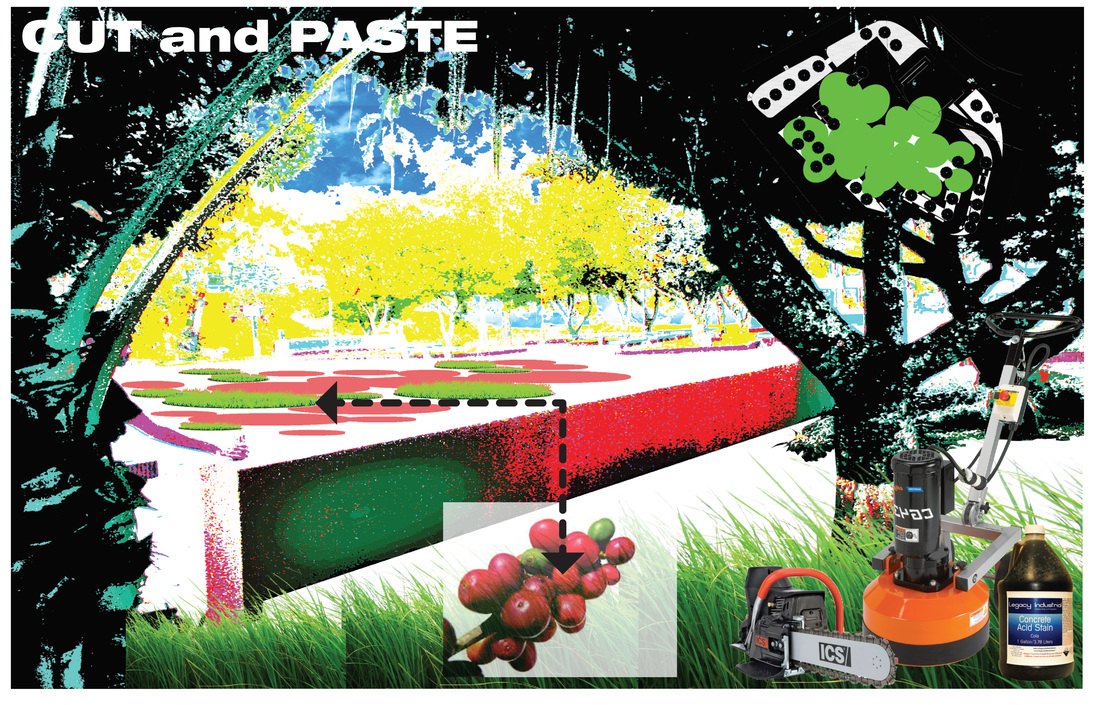 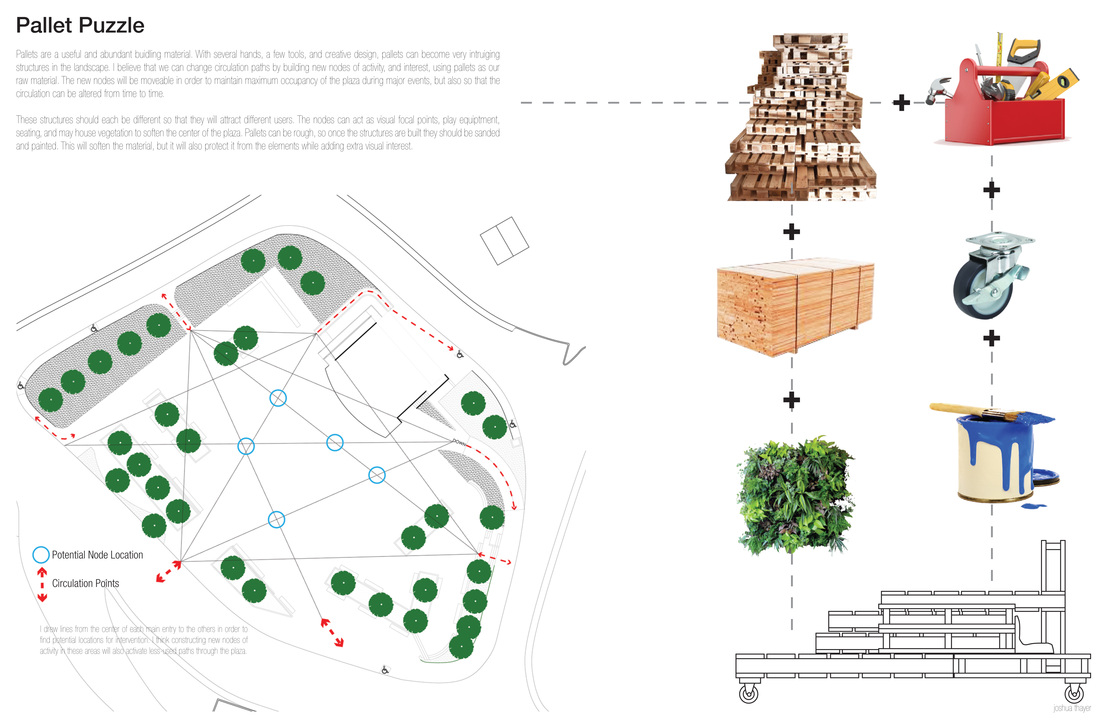 Drawing lines between existing entrances, I highlighted spots that I believe are least walked upon. Making interventions at these locations, preferably vertical structures, will cause new traffic patterns and interest in the center plaza. 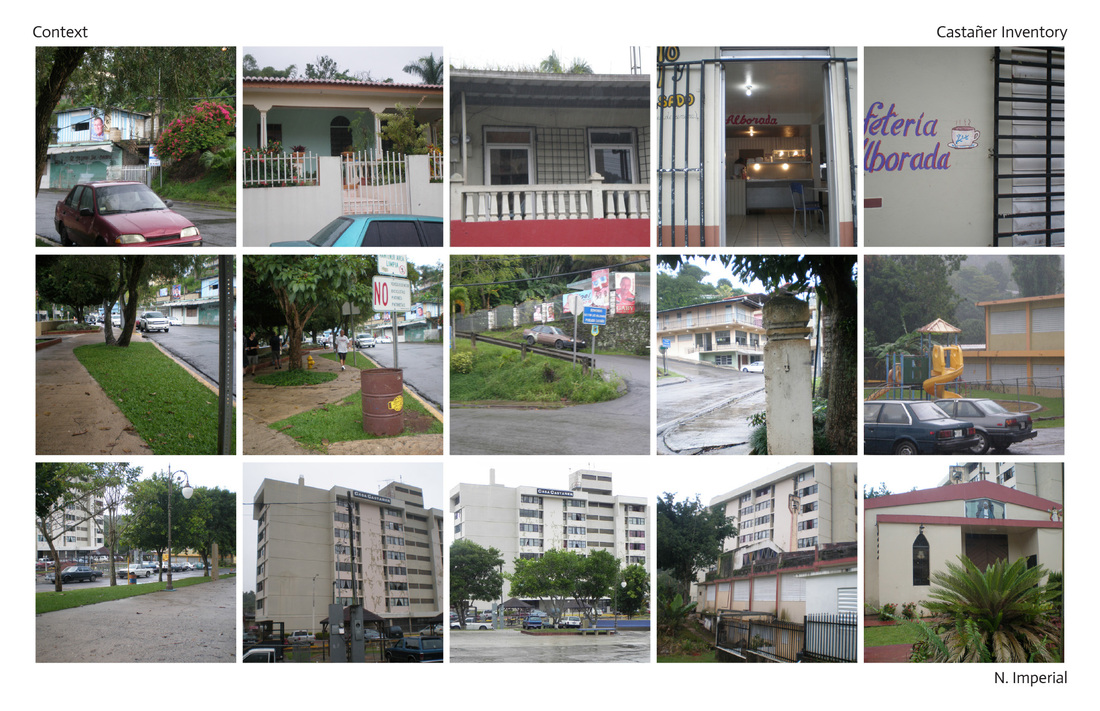 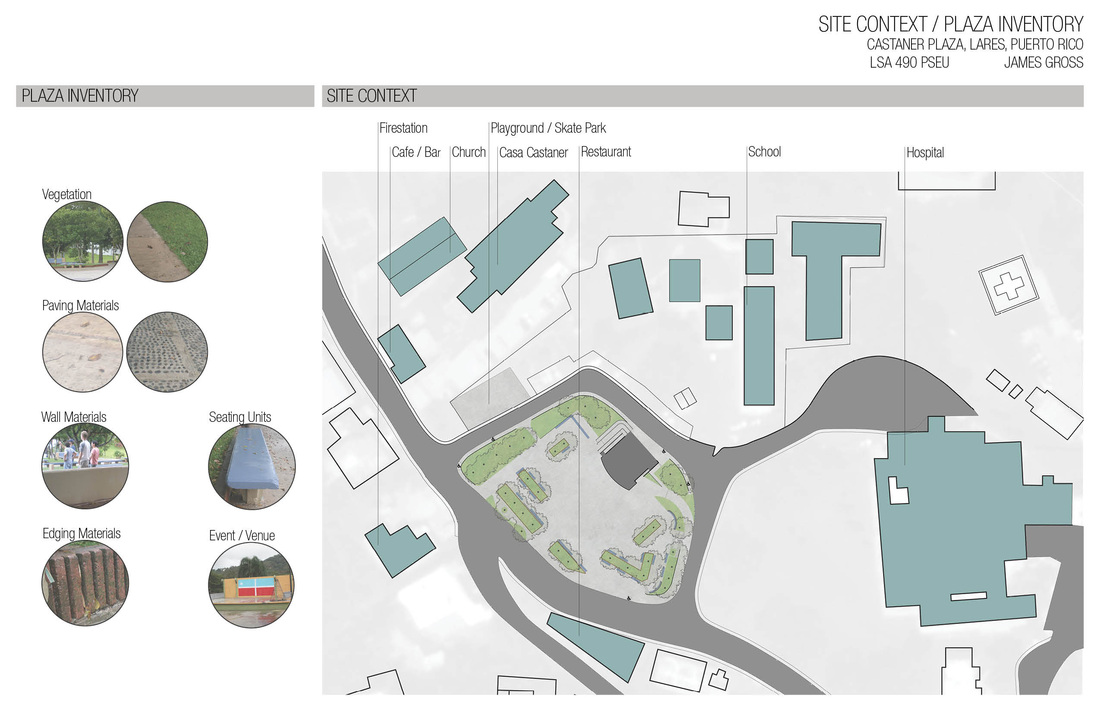 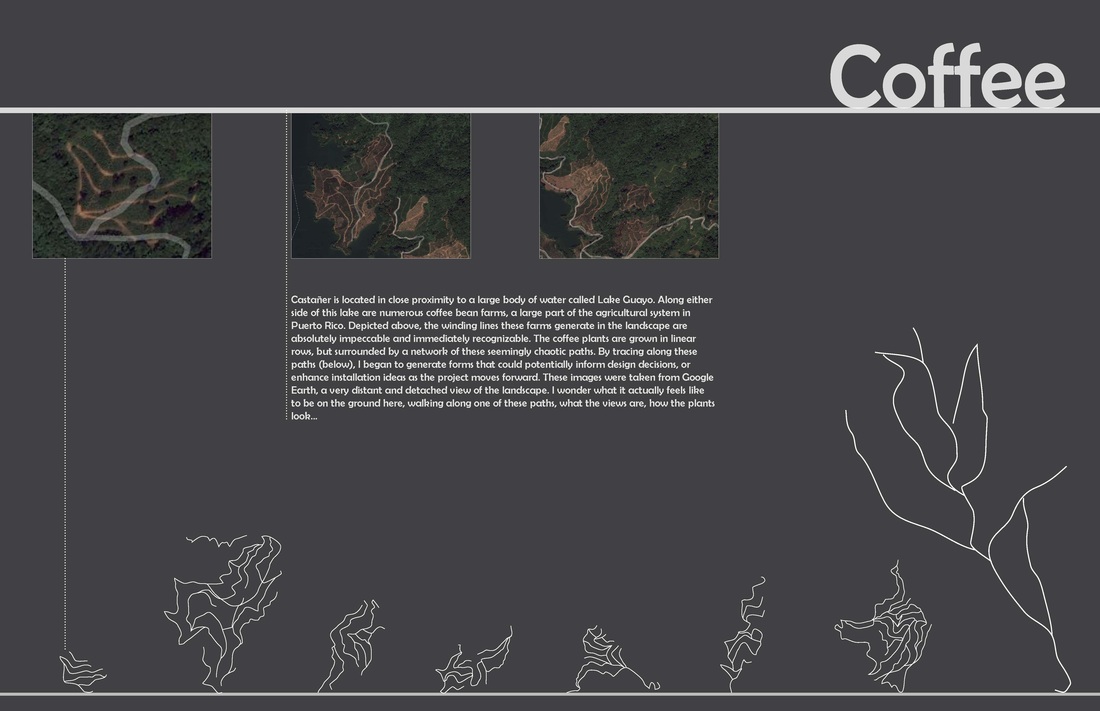 "Castañer is located in close proximity to a large body of water called Lake Guayo. Along either side of this lake are numerous coffee bean farms, a large part of the agricultural system in
Puerto Rico. Depicted above, the winding lines these farms generate in the landscape are
absolutely impeccable and immediately recognizable. The coffee plants are grown in linear rows, but surrounded by a network of these seemingly chaotic paths. By tracing along these paths (below), I began to generate forms that could potentially inform design decisions, or enhance installation ideas as the project moves forward. These images were taken from Google Earth, a very distant and detached view of the landscape. I wonder what it actually feels like to be on the ground here, walking along one of these paths, what the views are, how the plants look..." (Above Text) 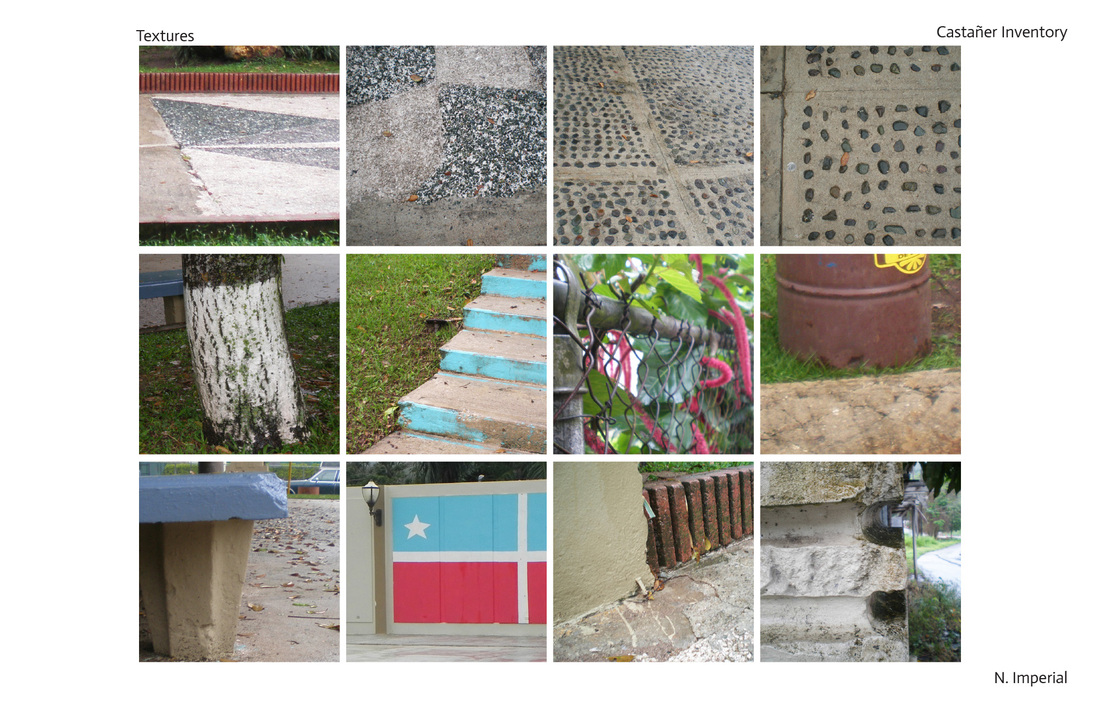 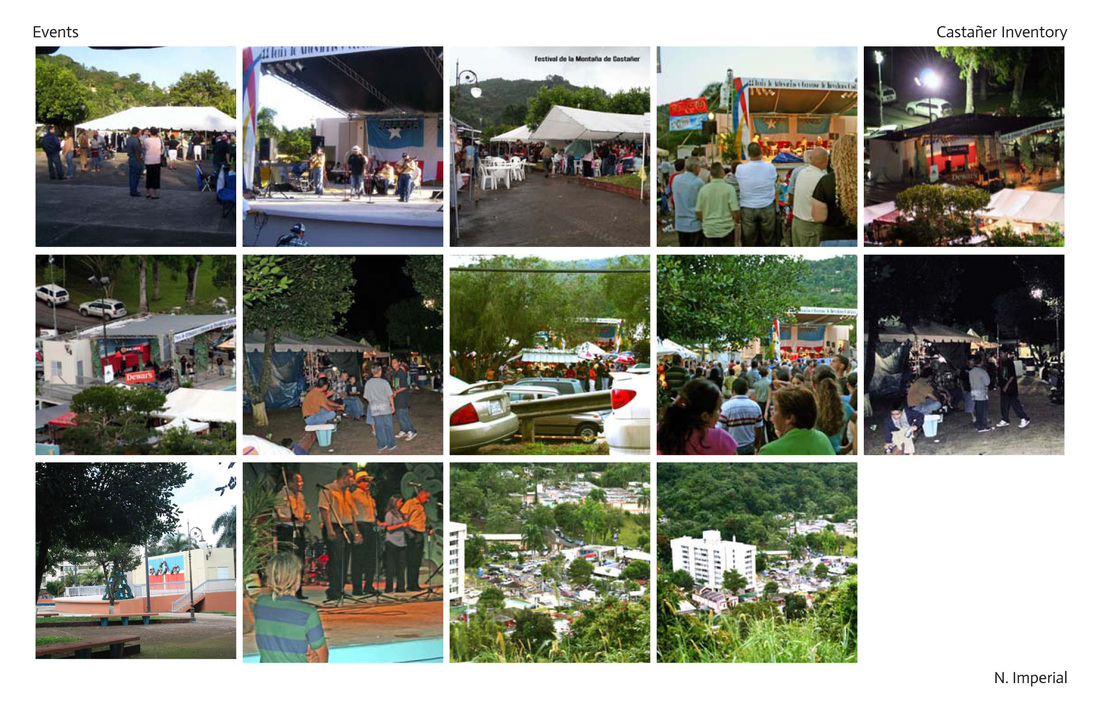 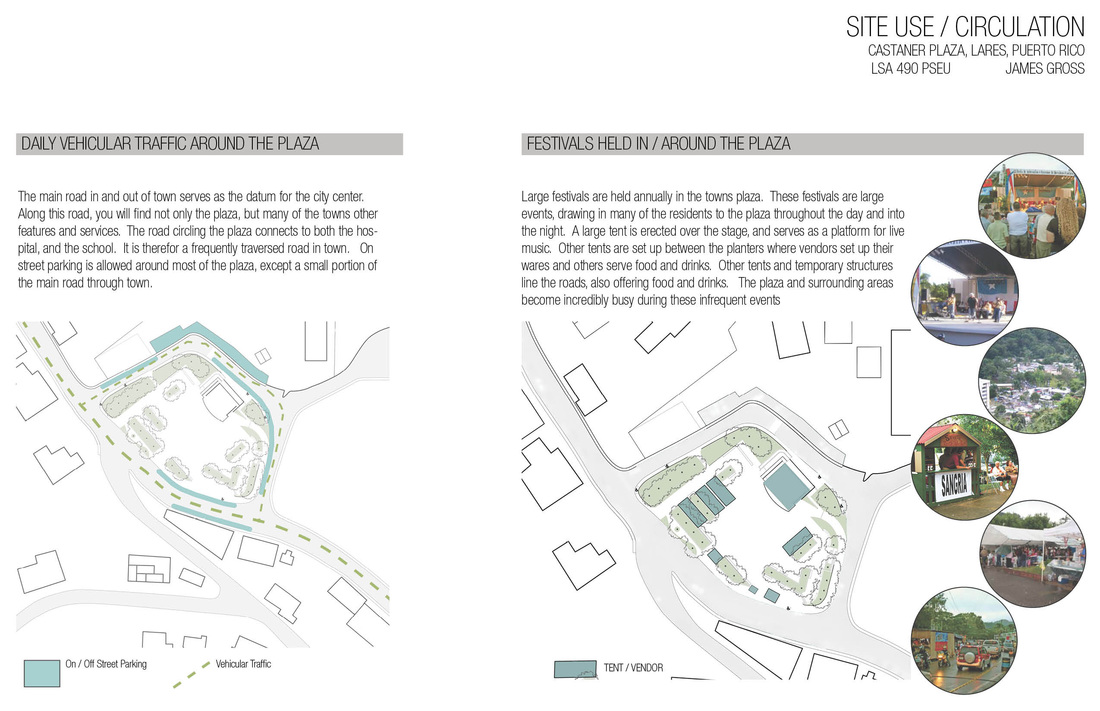 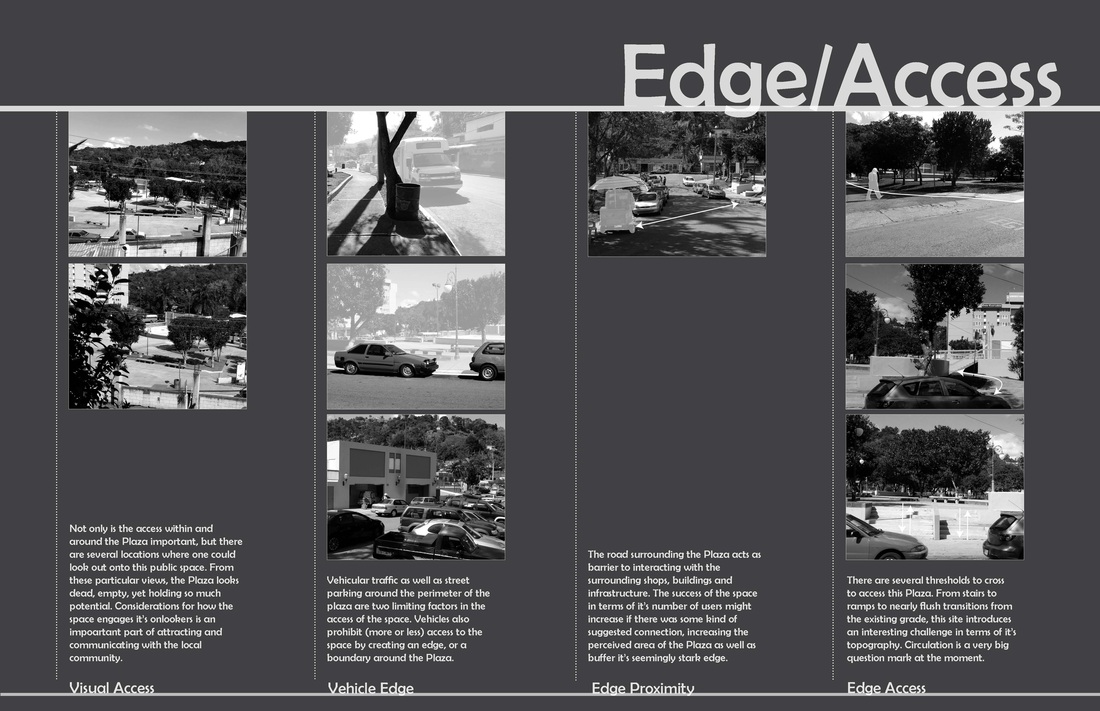 Visual Access
"Not only is the access within and around the Plaza important, but there are several locations where one could look out onto this public space. From these particular views, the Plaza looks dead, empty, yet holding so much potential. Considerations for how the space engages it’s onlookers is an important part of attracting and communicating with the local community."

Vehicle Edge
"Vehicular traffic as well as street parking around the perimeter of the plaza are two limiting factors in the access of the space. Vehicles also prohibit (more or less) access to the space by creating an edge, or a boundary around the Plaza."

Edge Proximity
"The road surrounding the Plaza acts as barrier to interacting with the surrounding shops, buildings and infrastructure. The success of the space in terms of it’s number of users might increase if there was some kind of suggested connection, increasing the perceived area of the Plaza as well as buffer it’s seemingly stark edge."

Edge Access
"There are several thresholds to cross to access this Plaza. From stairs to ramps to nearly flush transitions from the existing grade, this site introduces an interesting challenge in terms of it’s topography. Circulation is a very big question mark at the moment." 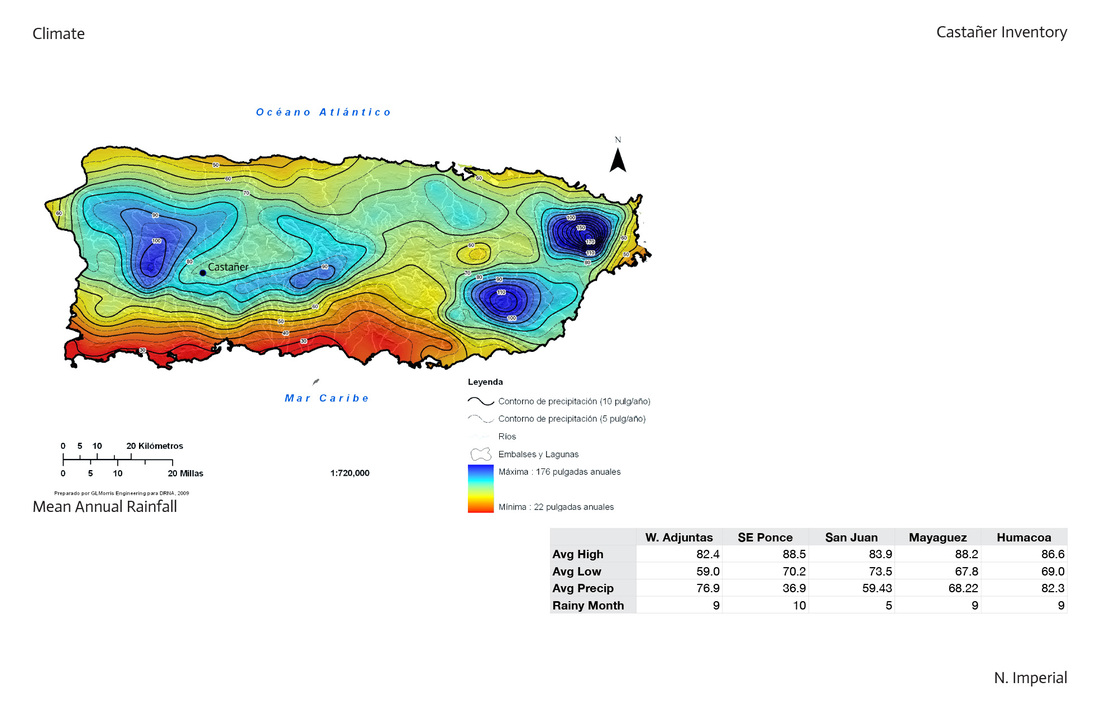 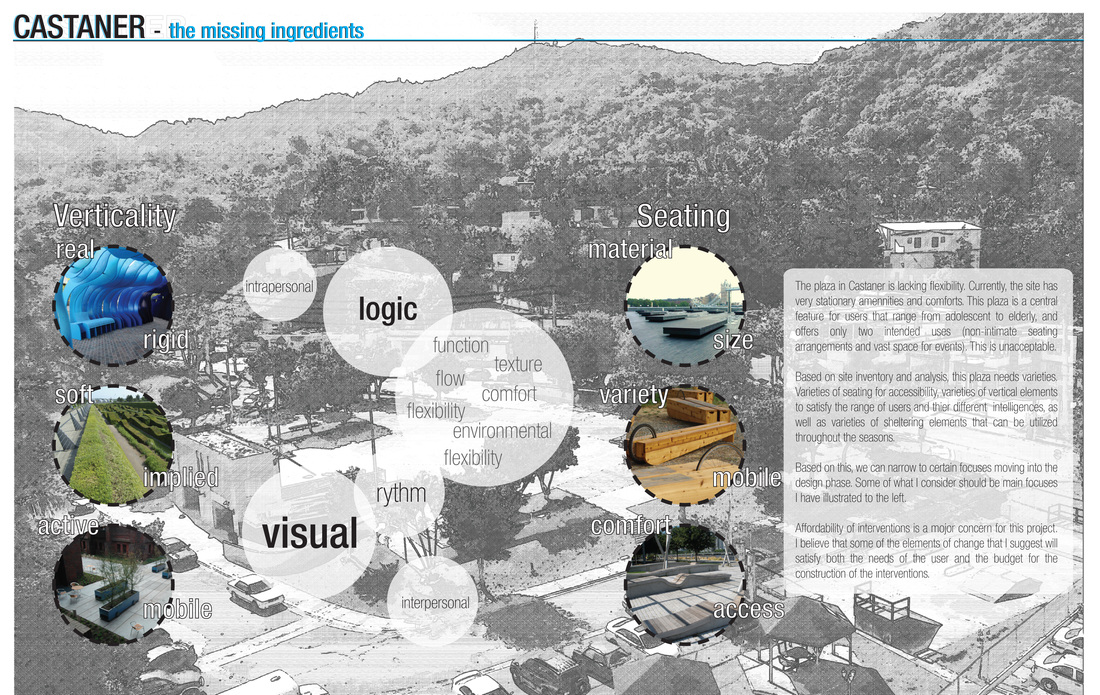 Visual Text - The plaza in Castaner is lacking flexibility. Currently, the site has very stationary amenities and comforts. This plaza is a central feature for users that range from adolescent to elderly, and offers only two intended uses (non-intimate seating arrangements and vast space for events). This is unacceptable. Based on site inventory and analysis, this plaza needs varieties. Varieties of seating for accessibility, varieties of vertical elements to satisfy the range of users and their different intelligence's, as well as varieties of sheltering elements that can be utilized throughout the seasons. Based on this, we can narrow to certain focuses moving into the design phase. Some of what I consider should be main focuses I have illustrated to the left. Affordability of interventions is a major concern for this project. I believe that some of the elements of change that I suggest will satisfy both the needs of the user and the budget for the construction of the interventions. 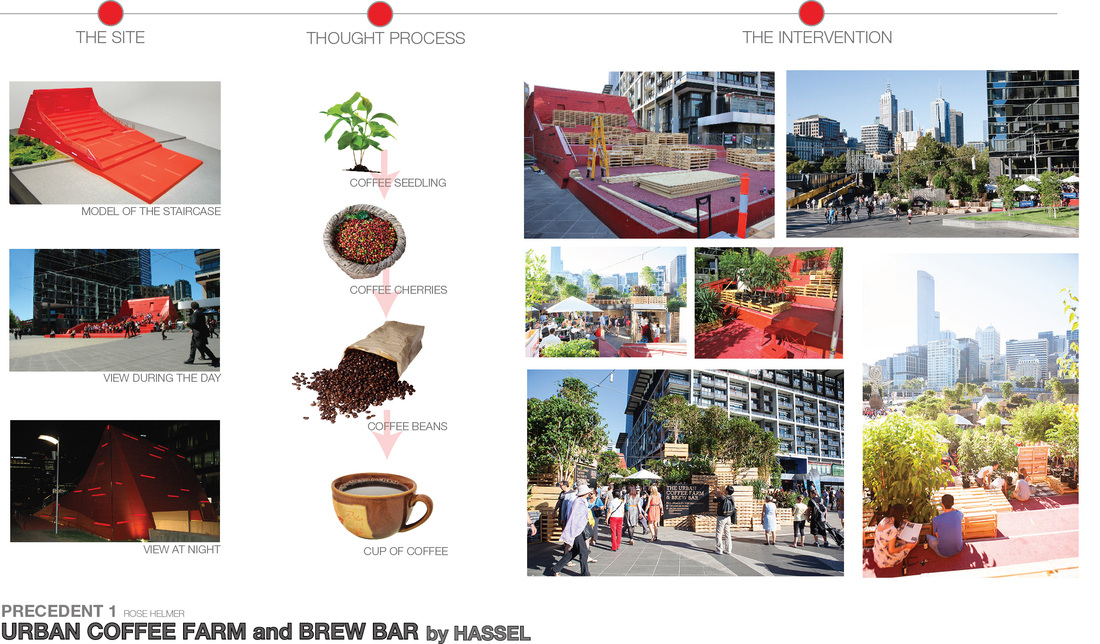 68 red cedar boxes "strive to activate 'lost' spaces" by providing a physical platform from which events can take place. The community was involved in the building process.

Pros: Easy to build, flexible, visually interesting/attractive, unobtrusive, modest
Cons: Probably doesn't weather well
How it relates to Castañer: New structures in a familiar environment can be the catalyst needed to remind a community of the value of a public space. Objects like these boxes are unique enough to evoke curiosity and exploration, while generic enough to encourage creative use. 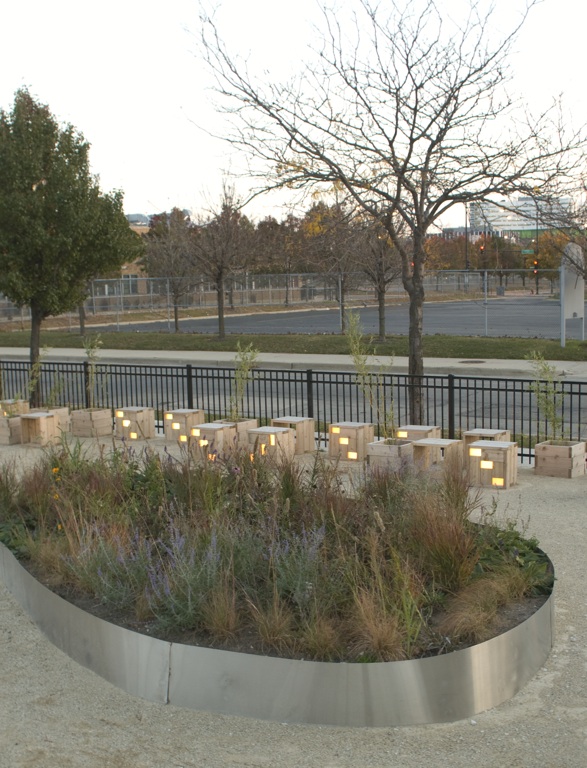 Using ipe boardwalk planks salvaged from the devastation of Hurricane Sandy, this movable installation represents the city's resilience in the face of adversity. It has been placed in several locations in the region, such as Times Square, Rockaway, Atlantic City, and DUMBO.

Pros: Visually interesting/attractive, tells a local story, movable
Cons: Limited functionality
How it relates to Castañer: Telling an important local story with materials in Castañer's plaza would be a meaningful way to connect with the community. Although this structure doesn't have the same versatility of the Westhaven boxes, its form is complex and fascinating while remaining easily understandable. 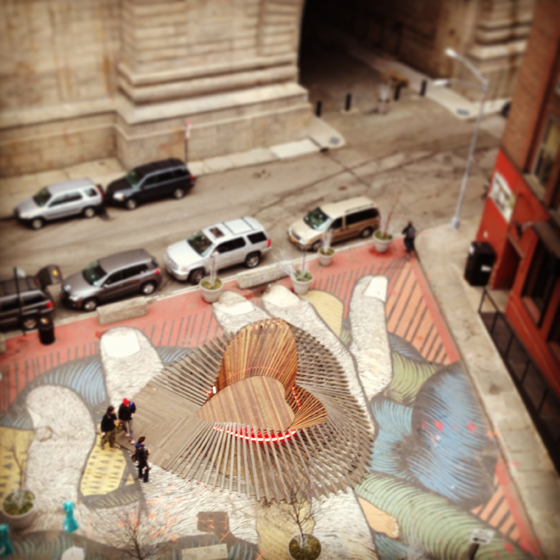 Using ipe boardwalk planks salvaged from the devastation of Hurricane Sandy, this movable installation represents the city's resilience in the face of adversity.

Pros: Visually interesting/attractive, complex form,
Cons: Limited functionality, unrelated to location, looks like a turd.
How it relates to Castañer: This type of installation is interesting on its own, but says little about the place. That said, complex and meticulous manipulation of simple, rough materials can be an inexpensive way to generate visual interest in a space. 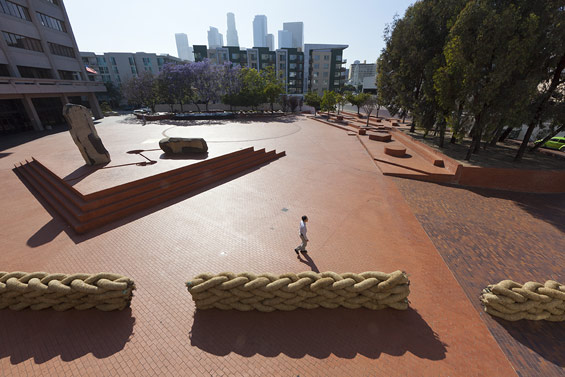 This project turns an existing concrete slab into a garden with only a $500 budget.  The concrete was broken up, and planted with vegetation that could withstand foot traffic, allowing wide use of the space despite the removal of concrete.
L'Estaque Interventions
L'Estaque France
Collectif-Etc

Dew Point: PEG-O-LA
http://static.panoramio.com/photos/large/41238197.jpg
Emma L. Oakes
A simple intervention: water retardant materials that render surface patterns. Considering the amount of rainfall Castaner, Puerto Rico receives, this could serve as a practical idea for their plaza. What would happen if we painted the road surrounding the plaza with water retardant material, activating the space when the storms inevitably hit. 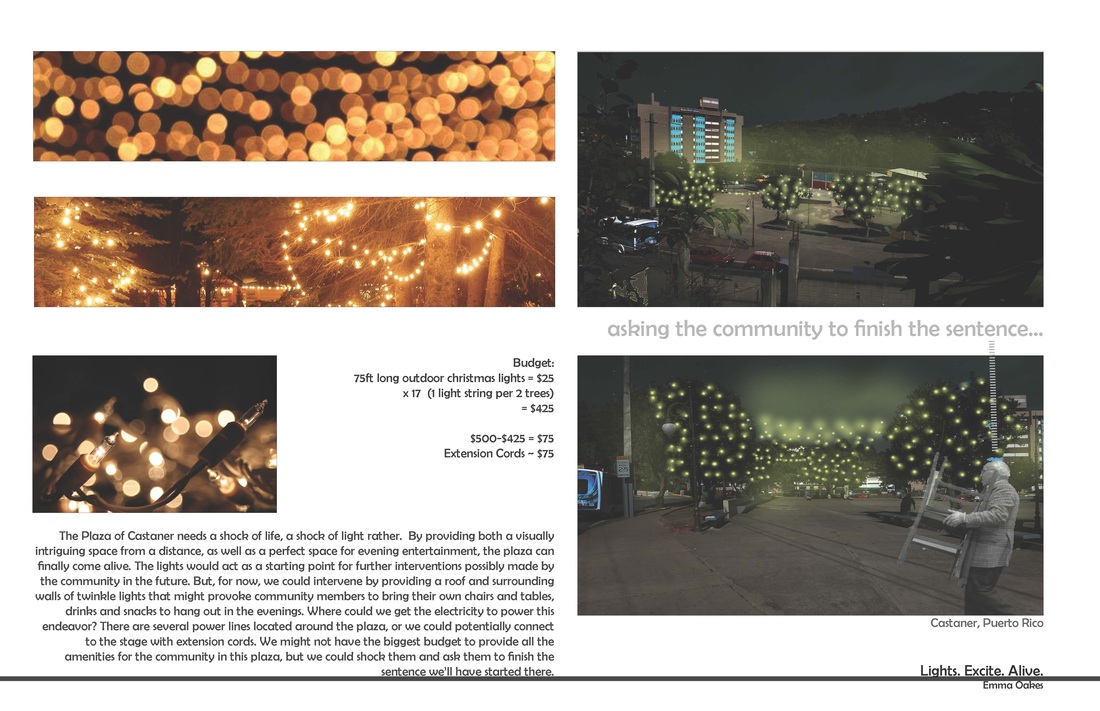 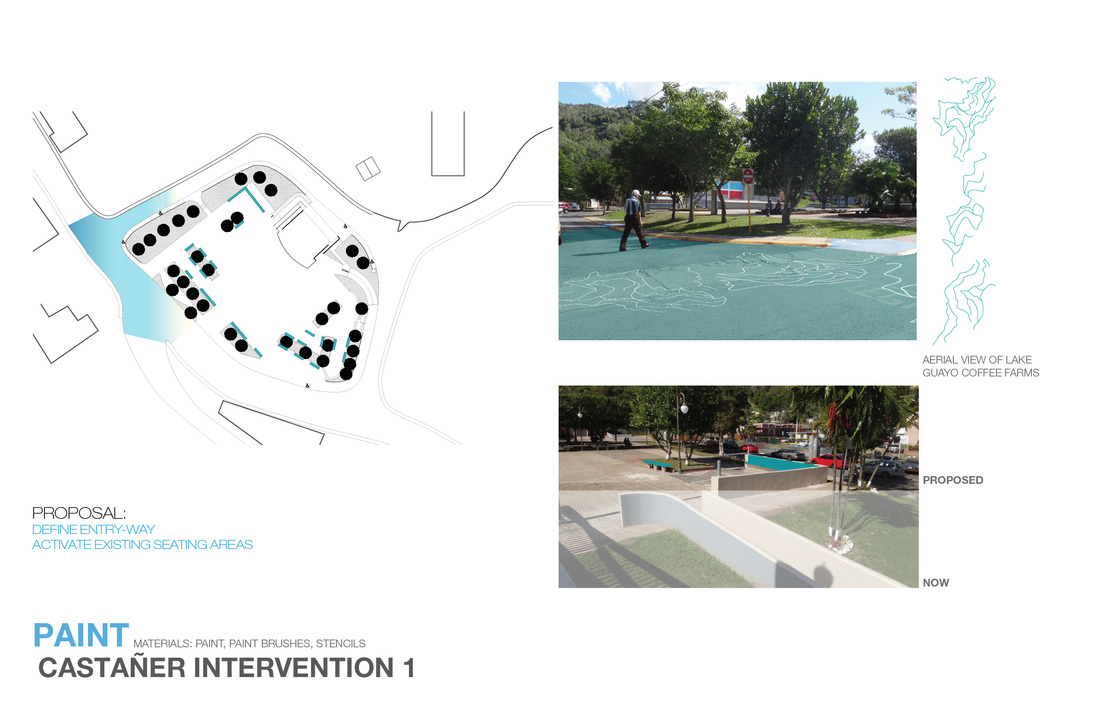 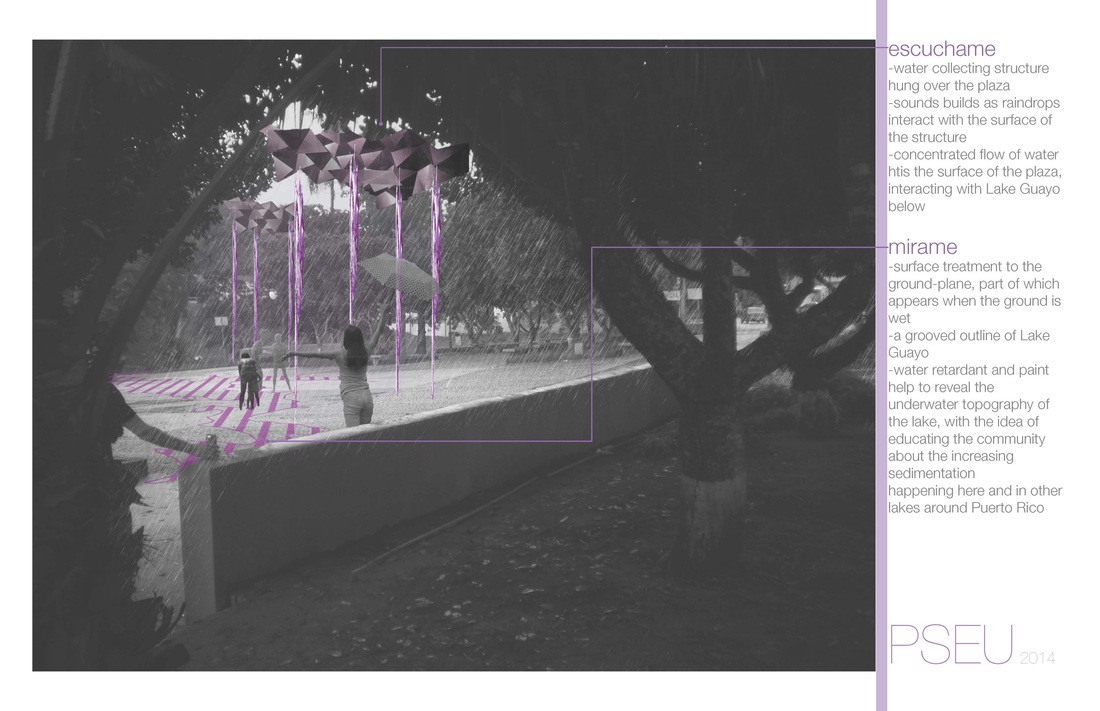