These experiments should be characterized by their feasibility (our ability to build it), cost and mainly impact. We want to be able to build, install the experiments, and finally observe and document their effects on the public realm. During field experiments we will initially utilize our ESF quad so that we can film the space from above and begin to understand human behavior in our every day environment. These mobile experiments will then be taken to Marshall St. and other parts of Syracuse (our laboratory city).

and the quad goes wild!

I wrote down that we were supposed to post our experiment proposal, so I'll do it regardless of the fact that it does not appear that anyone else has.

I propose fencing off a small part of the quad and allowing it to grow as it pleases.  We can plant a few wildflowers to liven up the process.  It's a huge faux pas to walk on the quad, which seems like a strange concept to me, as it is a huge amount of wasted space in an outdoor "room" traditionally designed to accommodate scholarly and social activities.  Having a patch of wild in the middle of the mowed quad would attract people to look more closely at the area and make them more comfortable with using this space on campus.

We could use recycled wood or broken parts of trees from Oakwood Cemetery to build the fence, so the only cost would be the cost of nails. 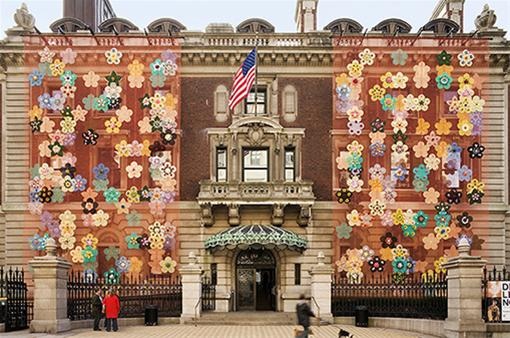 We could recreate Ken Smith's flower facade on a smaller scale. It would be made of recyclable/found materials. Perhaps we would do one strip or square and hang it from illick or moon. The back of moon also a blank canvas.

Outdoor lighting is all around us. Without it we would have to rely on candle sticks and flashlights to get around Syracuse Campus. My experiment aims at determining its impact on human behavior in relation to its color, and abnormal appearance in the middle of the Syracuse quad. How would people react to giant ballons lit up multiple colors? What colors would people be drawn to first?
When and where do people enter the quad to interact with the balloons?
-Luke Mancuso 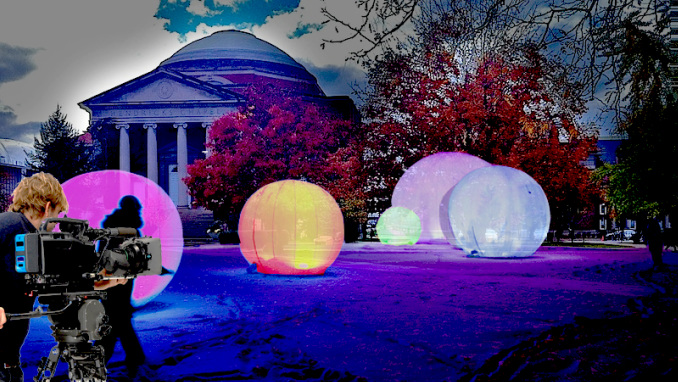 BIKE BLOCKED
Park Bikes in areas not necessarily designed for bike parking I.E. in buildings, on roofs, across the quad
To express the growth of the bike movement and the need for bike infrastructure in public spaces

OVERFLOW
Really disgusting display to explain what occurs during CSO rain events. Bring awareness to the need of rain infiltration.

SIT HERE
Reprove white’s theory on “people will sit where there are places to sit” by removing seating from places normally occupied and placing them in stranger potentially more uncomfortable locations: I.E. on a slope, in the middle of the quad, in a corner

LIGHT MOVEMENT
See how we can alter a person’s path by intervening with light structures or lit objects. Does the person move towards the object? away from it if it is a certain shape

Balloons can be filled with water and colored die and left outside overnight to freeze.  Once the water has frozen, the balloons are stripped away.  These colored ice globes can be used to bring color to the Quad during the winter months.  We could line the quad with these balloons, or create colored paths that would cut through the quad, connecting the main buildings on campus.  Maybe students would use these colored paths instead of the walkway.   We could stack them in the middle of the quad as a giant sculpture.  Or, hide these colored globes all over campus, and ask the students to participate in a campus wide, building vs building scavenger hunt. 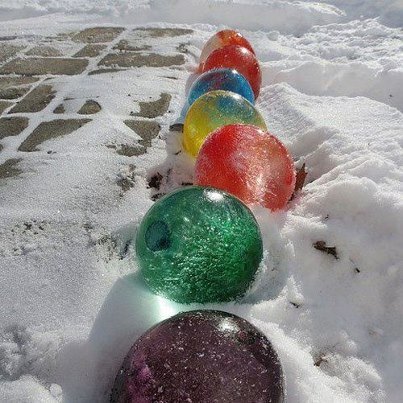 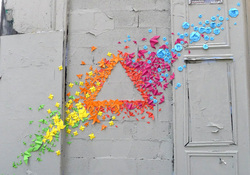 During the wintertime Syracuse has a gray and brown color atmosphere. Adding to some color and fun figures and shapes to highlight objects or places in Syracuse that you could miss do to the bitter cold. Drawing attention by placing big origami figures around parks or bridges to attack attention to cool places or placing small origami figure around an interesting object, so people can notice the spectacular things even in the dead of winter.
By Ana Maria Castillo Ruiz 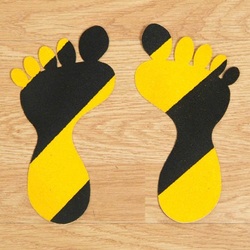 Road to   N o w h e r e / Road to   s o m e w h e r e
On and around the quad, place foot stickers to move people throughout the campus and eventually either lead them to a specific destination, or lead them aimlessly nowhere.

I have always been interested in how people situate themselves in public spaces. To better understand these tendencies I propose we place several lawn chairs in the quad. These chairs will be located in different areas, and they will be moveable. It will be interesting to see how people react to the newly added seating. Some people may choose to sit in the middle, while others may choose to sit in a group or towards the edge. Maybe nobody will touch the chairs, and they will remain where we placed them. This experiment should be done in the spring when the weather is suitable for outdoor relaxation. 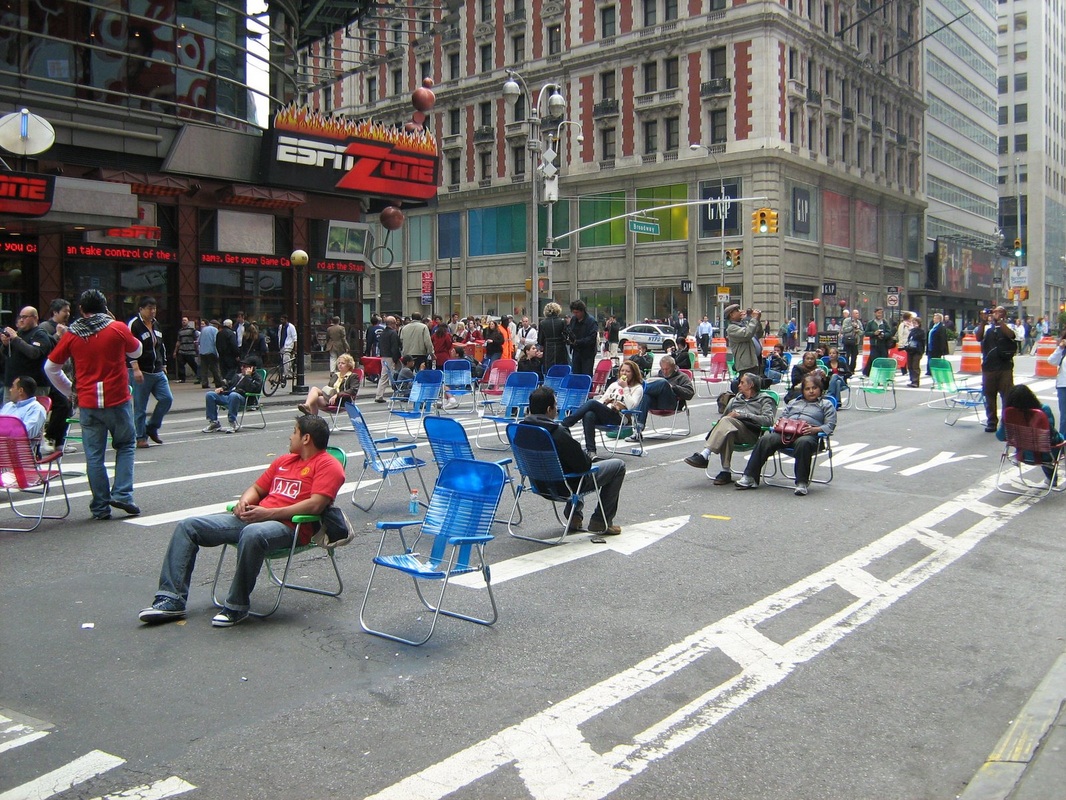 By 2050, 70% of the world’s population will be living in an urban area. Consequently, it is imperative as designers that we are cognizant of what makes successful (and unsuccessful) urban spaces. William Whyte’s The Social Life of Small Urban Spaces summarizes some of the ingredients. Ultimately, the success of an urban space could be determined by a single question: how conducive is this space for people watching? Despite the film’s date of production, many of the relationships discussed in the film are still relevant today.

+Public spaces should be integrated into the urban fabric, not separated (e.g. physical barriers, elevation changes)

+Seating should be flexible and multifunctional. Avoid seating that doesn’t compliment how people talk to one another and watch other people.

+It is not so much the sun than light that compliments the success of an urban space. Light can be integrated by fixtures, sun (duh!), and even off the surrounding architecture

+People like to converse on corners. Corners also happen to be the most heavily circulated/trafficked as well. Mediating the two is important but often times, people  instinctively behave in a manner that doesn’t interfere with use.

While many of the facts and figures presented in the film will be forgotten within a few days of viewing the film, it is the core concepts that we as designers should keep in mind. Often times, what we do on paper/computer translates very different on the human level. Whyte’s observations and own admission to this reinforce this notion.

William Whyte’s “The Social  Life of Small Urban Places” is an example of qualitative research completed by  coding behaviors in videos of people in various public spaces.  He  recorded public spaces both from ground level and from above, largely without
the knowledge of those being observed.

This is a great video to  watch for urban planners - it summarizes and legitimizes many of the things that we are taught about public spaces.  By watching how people interact with the public space and with each other in public spaces, Whyte was able to make some suggestions for planning that were adopted by New York City planning departments.  The most common activity seen in public
places is people watching people.  They like to be covered and protected by elements of the space, but they like to be able to still see everything around them.  People tend to accumulate around the edges and to hang out at the entrances and exits where they would run into people they know.  Proximity to the street was one of the most important factors in the success of a park – the closer to the bustle of the street pedestrian traffic, the more used the park tended to be.  Light, either from the sun or reflected off of buildings, and availability of food also were determining factors in the success of a park.

This short film is graphically outdated, but many his findings still stand true today. William Whyte examines the workings of small urban places, (plazas and squares...), through observation and various types of recording. I would say that his goal was to evaluate the success of particular places. He recorded user's behaviors of public spaces across the country, and used this observation based data to identify positive and negative attributes of the designed spaces. Whyte observed how, when, why, and what time people did what they did to understand how to better design for them. He identified the importance of seating (especially moveable), climate control measures, sound, accessability, and many others thorugh his observations of people. All of the things that he found are things that we can control as the designers of space. Comfort level influences when a space is used, but people influence how. We can create places with a plethora of modern comforts, but to create a succesful place, we must understand what drives people to behave the way they do. Although the film is outdated, Whyte clearly identifies many behavioral patterns that can help us better design places for people.

I have seen this film three times since entering the LA department. I think teachers use it so much because it applies to so many design theories and really represents a well done experiment. Every time I watch the film I always find the gender roles very interesting. The segregation of woman and men even in the 70s is clearly shown in the film. Woman sit in cluster in quite areas. In contrast groups of men are standing in more of dominant stance near the street or an area with a big view. I believe if they redid this film today they would still see gender isolation but not nearly to the extent of results of Whyte's 1970s results. A lot of current urban park designs have cool ways of introducing lighting into their deigns. William Whyte's film shows that people always gravitate towards the sun. Wether its later in the day and people are closer to the street for mental protection or during the day when people from office building just want to be sunning themselves. The film is always interesting to watch and there are many layers of William Whyte's analysis that can be applicable today. I think it would be interesting to film the Syracuse quad vs the ESF quad in the nice weather and see if it would be similar to William Whyte's film.

Although the film is outdated it is still relevant and accurate to the fundamental needs of a successful urban space. Because it focuses on the social-behaviors of people itself and our behavior doesn’t change, the findings can withstand time. The elements to a successful urban space are: sittable space, street, sun, food, water, trees, and  triangulation. Most of the parks featured in the film are still existing. One point I want to focus on is the connection between people and water. The narrator describes the San Antonio waterfront as “a little more than a drainage ditch” that the city “turns into a corridor that goes to the heart of the city”. The combining scales of the height of the buildings and width of the walkway, and number of trees and furnishings make the San Antonio river walk a very comfortable place to be. I’ve been there and find the river walk is a really cool escape from the city streets above and almost feels like a different city.

Another quote I found to make a lot of sense is the design of the outdoor cafe, “the best thing about the cafe has been a shrewd use of space “ and “the person who organized the cafe -- laid out the table and chairs with the tyrant eye of a good hostess”, noting how the tables and chairs were tightly spaced so that people were forced to greet each other and communication is encouraged.